“The duo casts the perfect spell over the audience.”
The New York Times – Critics’ Picks

“A fabulously funny parody.
Will tickle the funny bone of every age group.”
The London Daily Telegraph

“Blissfully funny, a winner in every way.
This show is a crowd-pleaser.”
The London Guardian

“Cleverly appeals to both ardent fans and parents.”
The London Times

“Even the purest of Potter fans would find it hard to object. My Potter experts loved it.”
London Financial Times

“You could do no better than to see Potted Potter.”
Toronto Globe & Mail 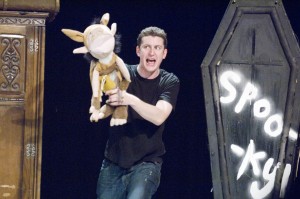 Sublimely potty and done with the lightest of touches, this daft two-man parody of JK Rowling’s Harry Potter novels is a bliss fully funny 75 minutes for anyone with a passing acquaintance with the boy wizard and He Who Must Not Be Named. Like all really good parodies, Dan and Jeff’s “unauthorised Harry Experience” is both a send-up and a heartfelt homage. It also incorporates recent revelations, so that the outed Dumbledore becomes “the only wizard in the village”.

In fact, it is all terrific family entertainment, as performers and writers Daniel Clarkson and Jefferson Turner “muggle” along with just the right mix of boyish exuberance and cack-handed charm. Dan, in particular, often seems a trifle confused between his Potter and his Lord of the Rings and Narnia adventures. Then there is his misunderstanding about the difference between Hogwarts and warthogs. And when he plays the Defence of the Dark Arts teacher, Lupin, the werewolf has inexplicably transmuted into an elephant. These mixups weigh heavily on self-appointed Harry Potter expert Jeff, all the more because Dan has used all the money set aside to employ 20 actors on the dragon in Book Four. The dragon, needless to say, turns out to be a severe disappointment.

At moments, there is a touch of the National Theatre of Brent in the prickly relationship between Dan and Jeff. This is also the only show in town in which the audience get to participate in a game of quidditch, even though Dan appears to think that a vacuum cleaner can be substituted for a Nimbus 2000 and Jeff has a trying time as the Golden Snitch. A winner in every way. Lyn Gardner

The deliberately daft but utterly delightful Potted Potter is an unauthorised attempt to condense all seven Harry Potter books into one hour’s stage time, and saves you an awful lot of reading. There’s sure to be an authorised stage version one day that will take the stories altogether more seriously, but they will be hard pressed to summon such genuine affection and wit – let alone get the audience to play a game of Quidditch with just a bouncing ball. Mark Shenton 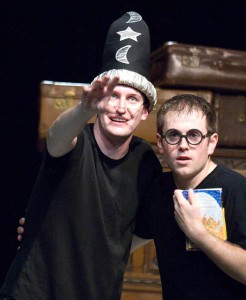 There was an alarming moment when my 14-year-old son and I entered the foyer of the Trafalgar Studios only to find the place bursting at the seams with tiny tots with ages ranging from five to eight.

I’d persuaded Edward to come to Potted Potter on the basis that this was going to be a devastating parody of JK Rowling’s books, and that it would be mocking, sophisticated and clever. In fact it, looked as though we were going to be in for the theatrical equivalent of Jackanory. Edward assumed that martyred look of the self-conscious teenager with an unreliable parent. Forty years earlier, I would have adopted an identical expression myself.

But, in fact, the show turns out to be a bit of a blast. The two performers Dan and Jeff are a classic double act, with Jefferson Turner playing the Ernie Wise role of the perennially hopeful yet permanently aggrieved straight man, while Daniel Clarkson adopts the Eric Morecambe persona of the dotty surrealist who knows exactly how to wind his partner up.

Initially, I found Dan’s wild-eyed, manic manner and constant shouting a touch fatiguing, but surprised myself by greatly warming to him as the show progressed.

What’s remarkable about Potted Potter is that it genuinely seems to appeal to audiences of all ages, as Dan and Jeff attempt to race through all seven Harry Potter books in just one hour.

After a slightly tedious opening, in which Jeff berates Dan for not securing the props, sets and actors he’d demanded, the duo get cracking on the books. Plump and amiable, Jeff plays the boy wizard, and Dan plays all the other roles, heroically undeterred by the fact that he seems to have only the most distant acquaintance with Rowling’s epic oeuvre.

The pair whip up an atmosphere of crazy delirium with glove-puppet monsters, enjoyably awful jokes, quick changes, silly accents and frenzied slapstick. And the audience participation proves riotous, especially in a frenzied game of Quidditch, in which poor Jeff finds himself absurdly dressed up as the golden snitch and the adults in the audience behave even worse than the kids when it comes to gaining possession of the Quaffle.

As someone who gave up on the Potter books (along with my wife and son) when faced with the dauntingly long fourth instalment, deciding that life was too short for quite so much turgid prose and repetitive plotting, the irreverence of this show comes as a blessed relief. And while adults can enjoy seeing JK Rowling’s disappointingly ponderous and po-faced fiction so gleefully sent up, the tinies are manifestly, and audibly, getting a real buzz out of the sheer anarchy of it all.

It will be a some time before I forget mild-mannered Jeff suddenly cracking and complaining about just how boring the character of Harry Potter actually is, even longer before the spectacle of Dan as Dumbledore, “the only wizard in the village”, fades from the memory as he sings the great gay anthem I Am What I Am. Listen out, too, for Voldemort’s version of the disco classic I Will Survive.

For those looking for an alternative to pantomime which will tickle the funny bone of every age group, this bonkers and blessedly brief show is just the ticket. Charles Spencer 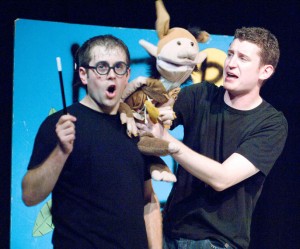 Things begin a little ominously for this fearless duo of reduced Rowling, writer-performers Jeff and Dan, who promise to deliver all seven Harry Potter books on stage, in just over an hour. Jeff is a Harry Potter expert/addict. Dan, however, is entirely ignorant of everything Hogwarts-related. Thus he has kitted out the stage with two fluffy warthogs, and a shabby wardrobe, through which he’s expecting all the characters to disappear to Narnia. And the audience is faced with the tiresome prospect of an hour of Jefferson Turner’s very straight man, whipping himself into a fury at the unfailing ineptitude of wacky odd-ball Daniel Clarkson.

But when Jeff picks up the first Potter instalment to boil down to five-minute size, dramatic matters take several turns for the better. Jeff is an overly enthused, bespectacled Harry, while Dan, a limitless supply of bad hats and dodgy plastic puppets to hand, plays everyone else, with increasingly anarchic, persuasive charm.

Their dealings with hecklers, like the treatment of the Potter series in general, is always cheekily rude, rather than snearingly mean, and it’s the buoyant geniality of the near impossible task at hand that renders it so endearing to the all-ages audience. That and the raucous game of quidditch, involving a blow-up globe, two large hoops, and a larger-than-life snitch that flies with the aid of flapping Marigold gloves. Voldemort’s refrain, ‘I Won’t Survive?’, marks a gloriously irreverent finale to a joyous, unarguably thin, but very lovable romp through Rowling’s back catalogue.

Potted Potter NYC began previews May 19 at the Little Schubert Theatre in New York City NYC. The show will be playing in NYC through the summer.