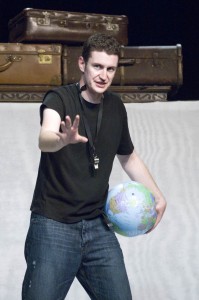 Daniel graduated from Bretton Hall in 2000 with a spring in his step and a smile on his face. Many years on, the steps are a little less springy but the smile still remains!

He is probably best known for being one half of the double act Dan and Jeff, creators of Potted Pirates, the Olivier-nominated Potted Panto, and Potted Potter which received its own Olivier nomination in 2012. Next up was Potted Sherlock, which premiered in August 2014.

He was delighted to be able take into North America including two amazing summers in New York. Daniel had a fantastic time throughout 2009–10 presenting in the CBBC Office for the BBC with Jeff, receiving his first-ever fan mail!

Film credits include The Usual Children and The Guilty Hunter.

Theatre includes Accidental Death of an Anarchist, Little Shop of Horrors and Art. 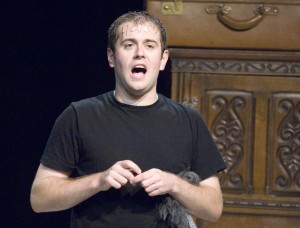 Jefferson has been messing about with Dan both on  stage and screen since 2005.

He has appeared on TV with the tall one on such shows as Blue Peter (BBC), Richard & Judy (Channel 4), The Slammer (BBC) and Big Brother’s Little Brother (Channel 4), amongst others, as well as residing in the CBBC Office for all of 2009 and a little of 2010.

Jeff thinks he did other work before he met Dan, but Dan says anything Jeff did without him doesn’t matter any more.

A Potted History of Potted Potter

2005: Dan and Jeff are asked to create a five-minute street show recapping the plot of the first five Potter books, for performance to queues of fans waiting for the midnight release of the sixth book.

2006: Potted Potter is born as the street show expands into an hour-long performance in which the first six books are parodied. The show premieres on August 4 at Edinburgh’s Zoo Southside venue. Forging a partnership with producer James Seabright and director Dominic Knutton, Dan and Jeff premiere a new version of the show at Pleasance Islington in October.

2007: Under the guidance of director Richard Hurst, the show tours the U.K. including Pleasance Edinburgh, where the seventh book is incorporated just a few days after its release. The tour finishes with a Christmas run at Trafalgar Studios in London.

2009: Owing to their commitments as Children’s BBC presenters, Dan and Jeff hand over the show to a new cast, David Ahmad and John Helier, who take it on tour to Adelaide Fringe, Melbourne Comedy Festival, and New Zealand Comedy Festival. Dan and Jeff wrestle the show back from them for a third and final Christmas run at Trafalgar Studios.

2010: The show takes a well-earned rest while Dan and Jeff create their new show, Potted Panto, premiering at the Edinburgh Fringe and transferring to the West End’s Vaudeville Theatre for Christmas, where it is nominated as Best Entertainment in the 2011 Olivier Awards.

2011: Potted Potter returns for another tour, starting at Bury St. Edmunds Theatre Royal and including runs at Pleasance Grand and London’s Garrick Theatre.

2013: The show continues touring in the US and Canada, including a second season off-Broadway and a return season at London’s Garrick Theatre.

2014: Following its Mexican premiere, the show plays its first tour of Ireland, prior to dates on board cruise ships and across Australasia later in the year.

Potted Potter NYC began previews May 19 at the Little Schubert Theatre in New York City NYC. The show will be playing in NYC through the summer.